Robust whistleblower protection is a crucial challenge for European democracy

The European Commission published on April 23, 2018, a proposal for a Directive "on the protection of persons reporting on breaches of Union law". Quentin Van Enis, a legal expert specialised in media, analyses for the EFJ the draft directive from the journalists’ perspective 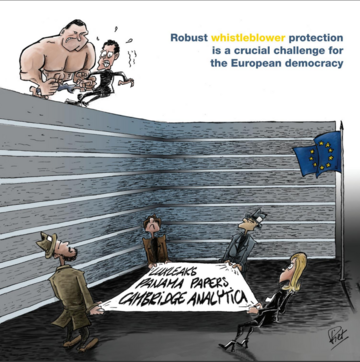 In September the European Federation of Journalists (EFJ) published a booklet which aims to analyze the proposed Directive on the “protection of persons reporting on breaches of the Union Law” adopted by the European Commission on April 23, 2018.

After reminding the General Principles (Part I) enforceable in this area (i.e. freedom of expression, public’s right to information, media freedom and the right of the journalists to protect their sources), the Commission’s proposed text is reviewed (Part II) to underline either the positive aspects and what could be improved during the future law-making process.

According to the author, the proposal has the merit to opt for a horizontal approach without restricting it to a specific sector, in any case limiting the scope to some breaches of the European Union Law. The whistleblowers being considered as a means to achieve specific objectives of the European Union, the text responds more to a utilitarian than a democratic design.

The proposed Directive opts for a “tier approach” establishing the obligation to report internally before being allowed to report to an external authority whereas in many cases - not clearly comprised in the exceptions provided - transparency is the only lasting remedy.

Despite the strict requirements imposed on whistleblowers to be entitled to enjoy its protective framework, the author applaudes its provisions, especially the possibility to apply for a legal and financial assistance; the broad definition of retaliation measures from which the whistleblowers must be protected; the recognition of the good faith exemption.

The booklet is available in English, French and German.