The article aims to explore the changing environment around news in Romania, focusing mainly on television as the main source of information as well as on the increasingly-used mobile phone 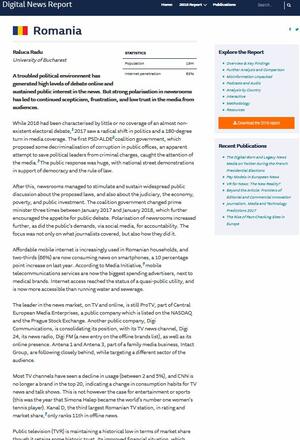 As a consequence of the conflictual political situation, scepticism and low trust in media by the audience have become prevailing. The radical shift that occurred in politics in 2017 also saw a fundamental turn in media coverage.

The first PSD-ALDE coalition government proposed a partial decriminalisation of corruption in public offices, apparently attempting to save political leaders from criminal charges. The government’s move caused a wide public response, with national street demonstrations in support of democracy and the rule of law.

Newsrooms stimulated public debate on the legal amendments as well as other issues of political  interest. The discussion was further encouraged by the change of two prime ministers in the coalition government within a year. The public attention toward political debate also inflamed polarisation of newsrooms, along with people’s request for accountability, expressed via social media.

According to the Media Initiative, quoted in the report, 2/3 of Romanian households use mobile Internet for news, with a 10% increase in 2017. Mobile services are also the biggest spending advertisers. The report stresses that Internet is highly affordable and its access is considered a quasi-public utility, now even more accessible than running water and sewerage.

As for TV channels, ProTV is still the leader on TV and online markets, along with Digi Communications. A decline in usage has met most TV channels, mostly in the public television (TVR), which has one of the lowest weekly records for European public broadcasters.
Multiple sources of news are often explored by Romanian people, as online news brands - such as Yahoo! News and local aggregator Ziare.com - performed strongly.

Investigative and narrative journalist outlets such as Recorder.ro and Teleleu - covering corruption money, poverty, administrative incompetence - have also  profited from the rise of online and social media distribution. Social consumption of news is differentiated: although Youtube and Facebook still represent the main sources (respectively at 75% and 83%), the use of Whatsapp and Messenger to find and share news is growing.