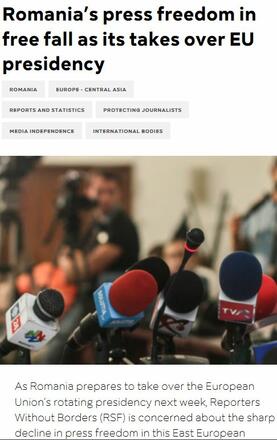 The report by RSF focuses on different aspects regarding media transformation in Romania. The major problems lie in editorial independence - often subjected to media owner interests; disinformation; an excessive politicisation of media outlets; and a high level of corruption in funding mechanisms.

The most significant problem of the Romanian media landscape is ownership concentration. This concentration followed the closure of many media outlets after the economic crisis, while the remaining ones started to be controlled by oligarchs. Editorial independence is the first casualty of this situation. Also, as in the cases of Antena 3 and Romania TV coverage of the 2017 and 2018 protests in the country, the main media outlets also tend to disseminate false information.

A further issue of considerable importance is the evidence that TV owners are often convicted of corruption. For instance, Sebastian Ghita, businessman and former owner of leading outlet Romania TV, is currently a fugitive in Serbia, as he has been charged with bribery, blackmail, and money laundering. The report highlights that this is not an isolated case.

Two additional issues are analysed by RSF, that is new legislation approved by the government and police violence against journalists.
With regard to the first issue, the report recalls that the ruling coalition (PSD-ALDE) increased its control over the public radio and TV media by replacing their executives. Furthermore, in 2017 a legislative amendment was passed which allows it to fire the management of national media agency AGERPRESS without any grounds.

State-owned media’s existence is also in peril because of the cut of many taxes, including the TV licence fee. In addition, the National Audiovisual Council (CNA) has been accused of “politicisation”, conflicts of interest, and incompetence in recent years. Moreover, its president and a former member faced corruption charges.
On the other hand, there have been indications of police violence against  Romanian and foreign journalists during recent protests. These actions have been defended by the Minister of Justice, Carmen Dan. According to the report, around 15 journalists were subjected to physical and verbal violence by police during the protests of August 2018.

Finally, the report suggests that the only hope for journalism revival in Romanian media is represented by investigative websites and journalists, such as RISE Project, Casa Jurnalistului, PressOne, and Factual. The government has already taken several measures to restrict journalists’ access to state-held information, using different means to limit access to information, including the European Union’s recent General Data Protection Regulation (GDPR). Although meant to protect personal data and privacy, the GDPR has also led to abuses, with Romanian officials using it as grounds not to share information with reporters. Moreover, Hotnews and RISE Project, which have published exposés on leading politicians such as PSD leader Liviu Dragnea, received visits from the National Agency for Fiscal Administration (ANAF). RISE Project has been threatened with a fine of up to 20 million Euros if it does not reveal its sources for a series of Facebook articles.