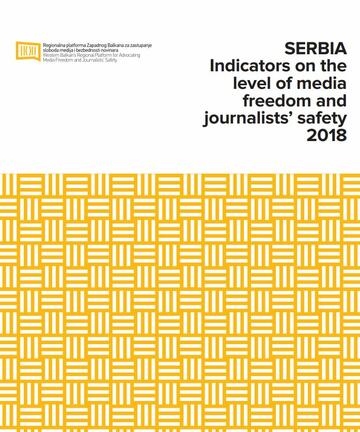 Findings derive from the analysis of three groups of indicators:

A. Legal Protection of Media and Journalists’ Freedoms

According to the document, although media laws in Serbia are basically fit and in line with European standards, the overall situation is deteriorating: rules are not enforced and the media are controlled in many ways, while independent outlets face constant pressure, especially at the local level. Particularly worrying is the lack of efficiency of the Regulatory Authority of Electronic Media (REM), together with pressures exerted through advertisers that entail “unlawful influence on editorial policies of media outlets”.

Other alarming issues concern the deterioration of the process of ‘Co-financing of public interest in public information’, the unsatisfactory level of information in national minority languages, ‘administrative silence’, the questionable autonomy of the public broadcasting services, the increasing number of lawsuits filed against journalists, the unequal access of candidates and parties in election campaign and outside of it, the discrimination of journalists in events of public interest.

Last but not least, the report highlights the difficulties in the implementation of the new “Draft Strategy for the Development of the Public Information System in the Republic of Serbia by 2023”, caused by disagreement among partners.

B. Journalists’ Position in the Newsroom, Professional Ethics and Level of Censorship

Working conditions for journalists in Serbia are highly precarious: “journalists are increasingly engaged as part-time associates”, states the author, and “low salaries, irregular payments”, “inaccurate data on salaries and type of labour contracts” characterise the labour market. Also, “privately-owned media outlets in Serbia do not have separate acts that ensure the independence of the newsroom from the management and the advertising department” and do not have separate codes of ethics. Pressures are exerted not only on non-profit media outlets, but also on Public Broadcasting Services.

As a consequence, “self-censorship is significantly rising”, mostly in the local media.

According to the report, “the database of attacks and pressures against journalists maintained by IJAS recorded 62 cases of pressures in 2017, twice as many as in 2016”. Primary target of attacks are journalists and outlets critical of the authorities. In 2016 the main stakeholders signed an Agreement to increase the level of journalists’ safety, that established a system of contact points and “contributed to better communication between associations and the Public Prosecutor’s Office and the Ministry of the Interior”: nevertheless, the number of unsolved cases remains very high.