SLAPP in the EU context

A research requested by the EU Commission about SLAPP, strategic lawsuits against public participation 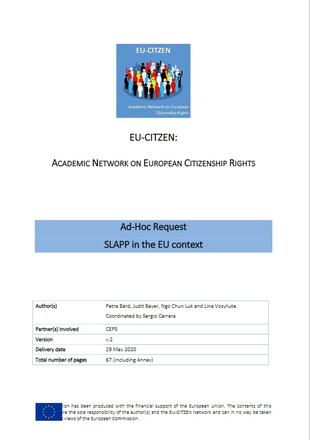 Breaking the silence. A new report on the legal measures that will give journalists back their voices

Sued Into Silence: How the rich and powerful use legal tactics to shut critics up

In its 5 chapters and 6 case studies, this report highlights the challenges to freedom of expression and European democracy, analysing also the legal and non-legal tools used in a SLAPP-related context.

From the key findings: "A free and functional press, especially investigative journalism, is a cornerstoneof all democracies. It is also a basic pillar of European integration. SLAPP cases interfere with these values and prevent citizens from engaging in a meaningful debate on public issues. SLAPP cases also interfere with fundamental rights of individuals, such as freedom of expression and freedom to receive information. The common European rules (Brussels I Regulation (recast) and Rome II Regulation) are based on the mutual trust between Member States. In case of tort (damages claims), Brussels I Regulation (recast) allows the plaintiff to choose the jurisdiction flexibly. The choice of law rules made an exception to defamation cases; therefore, plaintiffs have extensive choice of applicable law. As there are significant differences in both the procedural and substantive rules of defamation among Member States, vexatious litigants are able to leverage the legal regime to their advantage and against public participation".