SLAPPs against journalists across Europe

ARTICLE 19’s latest report looks at how SLAPPs (strategic lawsuits against public participation) have begun spreading across 11 countries in Europe, and the urgent reforms that can fix this 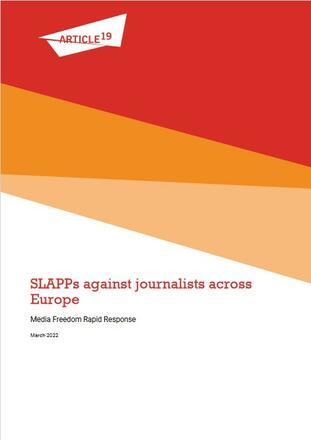 This report provides a Europe-wide overview of lawsuits that are taken to stifle scrutiny and public debate on issues such as corruption, mismanagement of public resources, and
human rights violations. Such lawsuits, known as strategic lawsuits against public participation (SLAPPs) are taken by powerful individuals in society not necessarily to win
cases, but to drag their critics through legal processes that drain them financially and psychologically and ultimately prevent them from exercising their fundamental rights
(including freedom of expression or freedom of assembly and association).

Why should you care about SLAPPs?

The people who file SLAPPs do not seek to win their cases. Their aim is to bully and bankrupt journalists. Many journalists report that such tactics affect their mental health and sometimes dissuade them from reporting on issues that affect the public at large.

This financial and psychological strain means that SLAPPs also make it harder for journalists to focus on their regular reporting. As a result, SLAPPs lower the quality of the public debate and reduce our society’s exposure to diverse information and ideas.

In short, SLAPPs can silence critical voices, decrease press freedom, prevent us from demanding accountability from our leaders, deprive our societies of information, and ultimately, threaten democracy.

The expense of bringing a lawsuit is a negligible cost for claimants given their wealth and influence. Defendants, on the other hand, are independent journalists, small media outlets, or  individual activists, for whom the cost of hiring lawyers can be crippling.