SLAPPs in Europe: How the EU can protect watchdogs from abusive lawsuits

This report is the joint submission to the European Commission public consultation on EU action against SLAPPs, strategic lawsuits against public participation 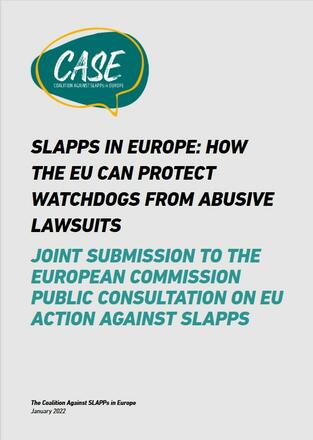 Submitted to the EU Commission by the CASE, Coalition against Slapps in Europe, in January 2022, the report is a detailed description and overview of SLAPP cases all over EU Member States.

It contains definitions, data, monitoring outcomes and suggestions about a problem that the European Commission has promised to tackle with legislative and/or non-legislative measures, as SLAPPs are considered to be a threat to democracy.

According to the submitters, the EU has the responsibility, and enjoys the necessary power and competences, to set standards and measures to inform and improve actions taken by the Member States.

●      EU anti-SLAPP measures must extend to all forms of public participation (including peaceful protest, activism, and whistleblowing, as well as journalism) and must cover cases filed on a domestic as well as cross-border level.

●      Should the EU legislator come to the conclusion that its legislative intervention may only be limited to SLAPP cases with cross-border implications, the proposed EU anti-SLAPP law should build on a broad interpretation of the notion of “cross-border implication” - including a reference to cases where there is a close factual connection between the action and the legal system of another Member State.

●      The legislative intervention should be accompanied by a strong recommendation calling on Member States to, at the minimum:

○       promote a discussion on legal ethics and professional standards

○       engage with and aid actors that can provide support and assistance to targets.

● The EU should effectively monitor and proactively support Member States in their implementation of legislative and non-legislative measures included in the EU anti-SLAPP initiative.