Safety of Journalists and the Fighting of Corruption in the EU

A study commissioned by the European Parliament’s Policy Department for Citizens’ Rights and Constitutional Affairs at the request of the LIBE Committee (Committee on Civil Liberties, Justice and Home Affairs) examines the chilling effect of crimes and threats against media workers, exploring regulatory and other measures to counter the phenomenon 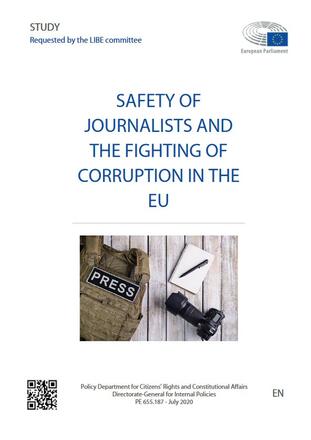 A thematic focus is devoted do the misuse and abuse of the law (SLAPP) with examples of anti-SLAPP legislation in different EU Member States.

The conclusions point out how the study has “revealed a number of positive and promising practices in various EU Member States”, but at the same time how “some problematic practices can also be detected across the European Union, such as threats to media pluralism and freedom in Hungary and Poland; a high incidence of SLAPPs in, for instance, Malta (where there are also concerns about impunity and the rule of law), Italy and Spain (where the absence of legislative protection for whistleblowers remains a concern); heavy reliance by politicians on defamation laws to stifle critical reporting, such as in Slovakia (where the discrediting of journalists, including by smear campaigns, is also a problem)”.

Among the recommendations, “continued vigilance is required to ensure effective protection of journalism and the safety of journalists and all other actors who contribute to public debate, paying due attention to the emergence of new threats and the aggravating impact of combinations of threats”.