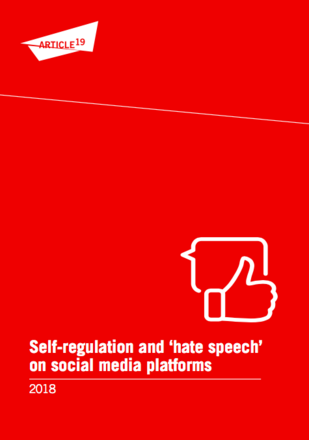 Recognizing that dominant social networks hold considerable power over the flow of information and ideas online, and being concerned about the way in which those companies have dealt with content issues on their platforms, this report intend to provide a new model for an effective self-regulation of social media companies.

In the  first section, the report outlines relevant international standards in the field of freedom of expression, underlying that any restriction on freedom of expression, whatever the objective it seeks to achieve, necessarily raises a series of legal questions. In the second section, the report looks at existing models of media regulation, comparing the role played by social media platforms to traditional publisher. The third section focuses on how social media companies deal with content on their platforms. In the fourth, the report explore a new model that could be applied to “hate speech” appearing on social media platforms.

A model of self-regulation has been the favourite approach to print media. It is considered the least restrictive means available by which the press can be effectively regulated, and the best system for promoting ethical standards. Importantly, the existence of an effective self-regulation mechanism can also reduce pressure on the courts and the judiciary. That’s why a number of recent legislative initiatives on “hate speech” – including the 2017 German NetzDG law on social media, such as the EU Code of Conduct – make reference to self-regulatory models. However, according to Article 19, these measures fail to comply with the requirements of international human rights law by delegating censorship responsibilities to social media companies.

In conclusion, in its final recommendations Article 19 reiterates that it is fundamental to acknowledge the role of dominant social media companies in the digital environment. If these companies now play a major role, the debate needs to move beyond companies’ freedom to conduct their business. A new different model should instead be inspired by the effective self-regulation models created to support and promote journalistic ethics and standards in print media and opened to civil society. In the word of Article 19: “We believe that these problems, albeit complex, should be further debated and explored. In today’s digital societies, there is a pressing social need to establish appropriate forums of this kind. We believe it is important to collectively engage more broadly on these issues, which are of major importance to the protection of the right to freedom of expression and human rights in digital environments”.

The report was produced with the financial support from the Rights, Equality and Citizenship Programme of the European Union, as part of “Media Against Hate” campaign.