Serbia: Indicators on the level of media freedom and journalists’ safety

Supported by European Union, the Independent Journalists' Association of Serbia has produced a report which intends to measure the level of media freedom throughout three main indicators 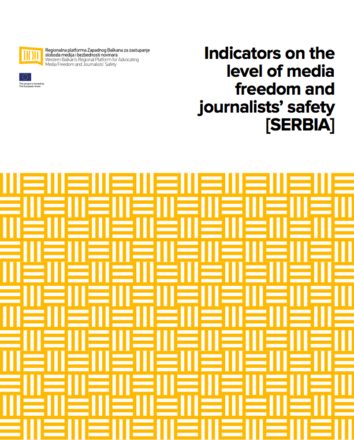 This report presents the findings of the research conducted within the regional project Western Balkan’s Regional Platform for advocating media freedom and journalists’ safety, which was implemented by national journalists’ associations not only in Serbia but also in Bosnia and Herzegovina, Kosovo, Macedonia and Montenegro with the financial assistance of the European Union.

The main objective of the research is to provide base-line assessments which will be further used in a regional mechanism for monitoring media freedoms at local, national and regional level. Being part of a broader project, this research has been conducted on the basis of a common methodology. According to this approach, the level of media freedom can be measured by three indicators: 1) legal protection of media and journalists’ freedoms; 2) Journalists’ position in the newsrooms, professional ethics and level of censorship; 3) Journalists’ safety.

In Serbia, a new set of media laws introduced basic measures for the protection of freedom of expression.  Nevertheless, freedom of the media is at a very low level and that has actually deteriorated since new media laws were introduced in 2014. The level of self-censorship is very high and the media is subjected to commercialisation. The current state of media freedom in the country can be attributed to government influence on the media and thus its lack of editorial independence. The few examples of investigative journalism are often targeted by smear campaigns initiated by media alligned to the government or by government officials' themselves.

Serbian journalists are working in difficult conditions. Their salaries are low and are often paid late, while their overall economic position has weakened. On top of that, the Independent Journalists’ Association of Serbia (NUNS) keeps a record of known attacks on journalists from 2008 onwards. The report includes a list of recommendations for Serbian authorities.