Shut up or I'll sue you! The Effects of the Laws on Libel in Italy 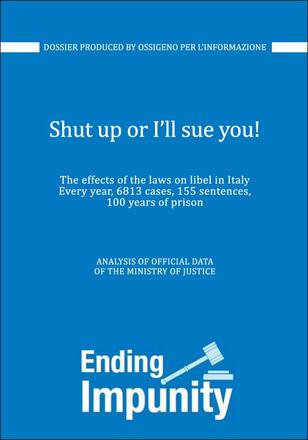 On 26 October 2016 Ossigeno per l’Informazione , together with the European Centre for Press and Media Freedom (ECPMF) based in Leipzig, published a dossier to mark the occasion of the International Day to end impunity for crimes against journalists. It was presented at the annual event in Rome that took place between 24 and 26 October 2016.

The publication, called “Shut up or I’ll sue you”, is based on the data received from the Statistics Office of the Ministry of Justice. It has produced the data for the first time, accepting an explicit solicitation from Ossigeno per l’Informazione.

The data provides precise and objective knowledge of the actual effects associated with the Italian legislation on libel. Since the real situation was not clear for a long time, the reality turned out to be more worrying that anyone in Italy imagined. Alberto Spampinato, Andrea Di Pietro, Giuseppe F. Mennella - the authors of the document - hope that it will help bring back the political debate with regard to this specific issue and encourage legislative amendments which would be consistent and effective.

The report concludes that the number of judicial proceedings against journalists is growing every year, strongly affecting freedom of information. Exposing the injustice is only the first step of action and there is still much to be done in order to improve the protection of freedom of expression and journalist in Italy.