How did Slovakian newspapers select, cover and portray corruption-related issues? The research findings of ANTICORRP, a project funded by the European Commission’s Seventh Framework Programme 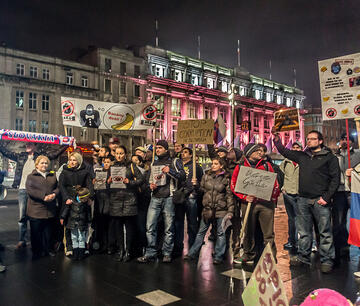 This report focuses on Slovakia’s print press, testing the correlations between press freedom, press readership and levels of corruption in the country. Corruption is a long-term structural problem in Slovakia: in a 2013 Eurobarometer survey it was perceived as a widespread problem by 90% of Slovak respondents; that’s precisely why in recent times the Slovakian Government introduced specific anti-corruption measures.

During the period in question (2004-2013) the research team selected four daily newspapers – two quality newspapers with different ideological backgrounds (“Pravda” and “Sme”), one business newspaper (“Hospodárske Noviny”) and one tabloid newspaper (“Nový Čas”) – and studied via computer the order of frequencies of specific keywords, words and its association. This method provided a general overview of the coverage of corruption cases, highlighting several corruption cases forgotten by journalists and revealing general correlations between business and corruption, regardless of the political spectrum.

In sum, the daily press has been found important in shaping public discourse on corruption, but there are at least three different language discourses with respect to corruption in Slovakia: journalistic, legal and administrative – with little coherence within each type. Finally, this report notes the positive impact of foreign media owners on media’s ability to freely report on corruption and presents Slovakia as a sort of outlier, where the correlation between free press and low level of corruption, as established in the literature, is not so clear-cut.

ANTICORRP is a large-scale research project financed by the European Commission in order to investigate those factors that promote or hinder the development of anti-corruption policies. Co-funded by the Seventh Framework Programme for Research and Technological Development of the European Union, the project started in March 2012 and ended in 2017, involving 20 research groups in 15 countries.

This report was published together with a “twin” human assisted content analysis focused on the same period and newspapers.