In the framework of a project funded by the European Union – “European Media Policies Revisited: Valuing and Reclaiming Free and Independent Media in Contemporary Democratic Systems” – this study combines a country-based study with a comparative analysis across media sectors and media services in Slovakia 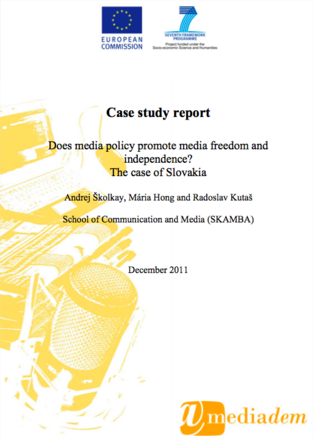 Financed by the European commission, MEDIADEM is a research project which studies the factors that may promote / prevent the development of policies supporting independent media and evaluates the external pressures on the implementation of state media policies stemming from the European Union and the Council of Europe. The project investigates the configuration of media policies in 14 countries (Belgium, Bulgaria, Croatia, Denmark, Estonia, Finland, Germany, Greece, Italy, Romania, Slovakia, Spain, Turkey) and examines challenges and opportunities generated by new media services for media freedom.

The aim of this case study report is to explain the key conditions that shape the implementation of media policy in Slovakia, examining whether such policy helps or hinders the free action of the media. The report is divided into five sections, which consider the actors and values of media policy; the structure of the media market, the composition of media content; the journalistic profession; and the media literacy in the country.

According to this study, media policy in Slovakia does not promote independent media. In this field an important role is played by the Constitutional Court – which historically has shown a long-term liberal commitment towards the promotion of freedom of expression in the media – and by the European Court of Human Rights, which is generally recognized a standard-setter in these issues. Nevertheless, the role of these institutions is limited, since the main internal regulator in the country – like the Council for Broadcasting and Retransmission – prefer somewhat limited media freedom. Regarding structural regulation, in Slovakia media policy are largely created ad hoc, rather than according to a clear strategy. The role of economic and corporate interests in policy formulation is relatively limited, with much depending on the government in power. At the same time the major journalistic organisation have a little impact on the formulation of media policy – indeed, they have a negligible prestige among the majority of journalists –, and public debates on media policy issues are usually rather poor in argumentation, and civil society plays a marginal role in the policy process.

In a nutshell, in Slovakia the contribution of domestic media policy to the protection of media freedom is controversial. The study also proposes some solutions for the improvement of the general state of affairs in Slovakia which would further increase the independence for the media.