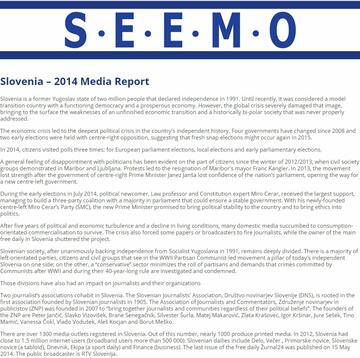 Specific cases are considered, including the case of the Slovenian journalists Anuska Delic and the ECtHR ruling about the magazine Mladina, the role of self-regulatory bodies, and the impact of political processes on the media landscape of Slovenia in a year in which Slovenian citizens visited polls three times: for European parliament elections, local elections and early parliamentary elections.

Charges against Anuska Delic have raised concerned for the misuse of legislation to control the publication of sensitive information. In response to this concern, both Journalists' associations in the country, DNS and ZNP, urged the government to change the country's Criminal Code that currently includes prison sentences for journalists accused of publishing classified information or defamation.

During the year, the case has also been raised about unfair working conditions for journalists employed by the public television RTV Slovenia.