Societal costs of “fake news” in the Digital Single Market 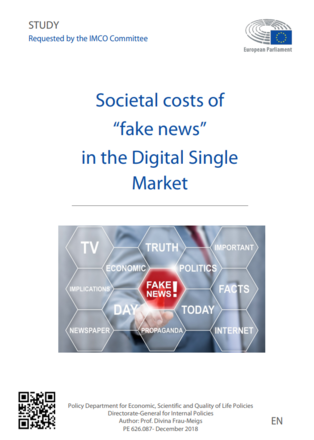 The aim of this in-depth analysis, requested by the European Parliament Committee on the Internal Market and Consumer Protection, “is to set the general framework for understanding the issue of ‘fake news’”.

In particular, the report questions the role of social media platforms “as major vectors of such disruptive phenomena”, redefining fake news as ‘malinformation’ (“the triple conjunction of human malevolence, marketing malpractice and engineered malware”), and evidencing the social costs of this combination: the integrity of information and the integrity of elections.

Then, it outlines “‘soft’ and ‘smart’ high priority measures” to minimise the consequences of rising information disorders, “at the source before the event, when ‘fake news’ is produced and later, when they are disseminated for consumption”.

In conclusion, the report evidences the need, referring to the EU, to “allocate specific means to deal with the responses suggested and focus on the transborder, panEuropean scope of such mechanisms while paying attention to inter-sectional arrangements”, underlining also the need to publicly monitor data and algorithms “to avoid unwanted and unexpected social disruptions”.