Spain: Press freedom in a moment of change

Compiled by an international group under the auspices of the IPI, the report "España: La liberdad de prensa en un momento de cambio" brings to the public responses by Spanish politicians confronted with deficiencies in honoring citizens' rights amid a period of major crisis 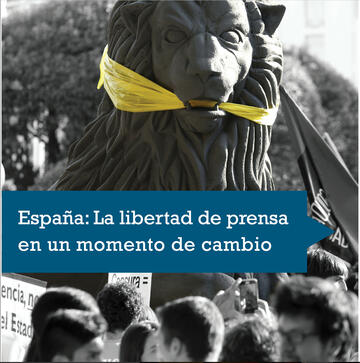 This report presents the findings and conclusions of an international high-level mission brought together in Spain by the International Press Institute (IPI) in June 2015. It is the culmination of almost a year's work by the IPI-led international coalition.

One of its main goals was to take directly to officials and representatives of Spanish political parties the concerns relating to freedom of the press and expression, and to summarise their responses when confronted with such issues. Another was to educate the public on the threats to freedom of expression in Spain.

The high-level mission took place in the midst of an unpredictable election year and turbulent events. Afflicted by a devastating financial crisis (which may now be subsiding), Spain experienced the sudden rise of new political parties and social movements. Many of them are not only a reaction against the harsh austerity measures imposed, but also against a wave of corruption scandals that have affected traditional political actors. Furthermore, these new parties and movements have joined more established forces in the struggle over control of the country and its political future.

Participants of the international mission were:

Also part of the mission were members of the Platform for the Defence of Free Expression (PDLI). Based in Madrid, this is a broad grouping of lawyers, journalists, media outlets, consumer associations and academics working actively to counter Spain's 'gag laws' and other rights violations.
The first part of the mission's report contains an overview of the issues the delegation addressed, and the reponses of Spanish officials. In the second part, two independent experts who joined the mission reflect critically on the legal reforms recently undertaken and the situation of the media, respectively.

Almost all major political parties in Spain - including the Partido Popular ("Popular Party") now in government - allowed the delegation to meet with prominent representatives and were generous with their time when discussing the issues raised. Unfortunately, the same cannot be said of the Spanish Government itself. Despite numerous attempts by the IPI and its partners, no official was available from the ministries of Justice, Interior or Industry, from the Vice-Presidency or the Secretariat of Communication. In some cases, requests even went unanswered.

Translated and adapted from the report's "Antecedentes" ("Background") section.