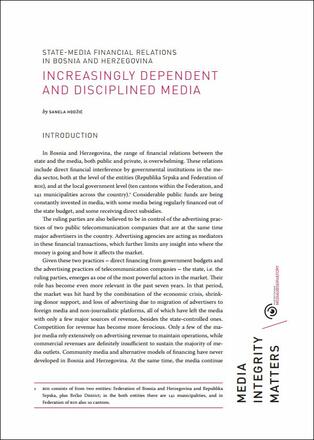 Media in Bosnia Herzegovina are becoming increasingly dependent on state financing. The impact of the interference by governmental institutions and political parties in the media and advertisement market is increased by the intermediary role of advertising agencies, which further limits any attempt to track money flows between public institutions and the media.

Influence exerted by ruling parties became more relevant in the last 7 years, when the combination of the economic crisis coupled with the withdrawal of donors' support have left the media very exposed to dependence from state-controlled sources of revenue.

This report examines three aspects of state-media financial relations in Bosnia and Herzegovina: direct state funding of media, government-related advertising practices, and, finally, the influence of ruling parties on the financing of Public broadcasters.