In Macedonia, the funds allocated to the media by the government increased over the years, feeding corruption and clientelism 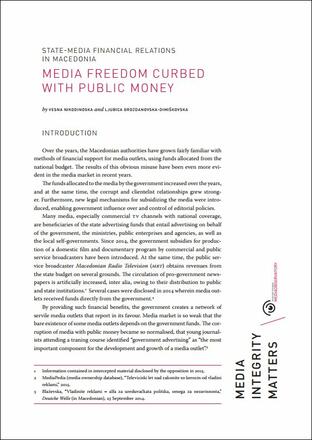 In Macedonia, an extremely effective mechanism for government influence over editorial policies is represented by huge financial benefits allocated from public authorities to media outlets. In the limited Macedonian media landscape, government funding is fundamental in guaranteeing the sustainability of media outlets, hence constituting an effecting leverage forcing media to adopt a specific editorial policy.

By providing such financial benefits, the government creates a network of servile media outlets that report in its favour. Media market is so weak that the bare existence of some media outlets depends on the government funds. This situation has been reflected in the editorial policy, the fall in professional and ethical standards in the newsrooms, as well as in culture of fear and self-censorship among journalists.

Significant concern is raised in the publication regarding the amount of resourced devoted to finance media, absorbing a relevant percentage of the state budget.

The report notesthat the lack of transparency regarding these financing mechanisms goes hand in hand with the diversification of channels through which public funds are allocated. Several patterns are identified in the report concerning the structuring of government funding to media outlets: media receive government funding based on favourable editorial policy; a key role is played by “State advertising funds” entailing advertising on behalf of the government, the ministries, public enterprises and agencies, as well as the local self-governments. A third pattern includes established pro-government media, receiving revenues from the government via direct channel.