State-media financial relations in the countries of South East Europe 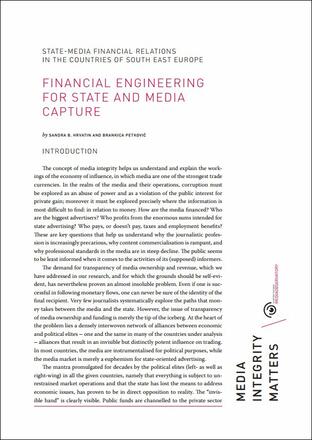 The first element pointed out in the report is the opacity of media ownership structures. “Over the years, owners have developed a range of incredibly creative methods to conceal both ownership connections and their ties to ruling political parties”, and the process of privatization did not positively impact on this.

In the small media markets of the region, the revenue generated by state advertising makes the difference between survival and bankruptcy and are therefore crucial in determining editorial policies. In Bosnia and Herzegovina, Macedonia and Serbia, for example, the state is the most powerful financial player in the media market, especially since the onset of the economic crisis.

The state supports media directly or indirectly in most countries and in many different forms: through the funding of public media; through lower tax rates; through special tax deductions; by advertising public authorities in the media; through direct assistance for individual media industries; through the financing of particular content (co-funding for programming); by granting minorities communication rights; or by subsidizing local radio and television outlets.

The regional overview is based on the SEE Media Observatory research reports on media finances and state-media financial relations in seven countries of South East Europe. The reports are available at http://mediaobservatory.net/media-integrity-reports-2015