State of SLAPPs in Serbia

The latest report by ARTICLE 19, the American Bar Association (ABA) Center for Human Rights, and the Independent Journalists’ Association of Serbia (NUNS), analyses the provisions that are most commonly misused to file SLAPPs, strategic lawsuits against public participation, in Serbia. The report highlights patterns from multiple cases brought against journalists and activists by public officials and other powerful individuals in the past 10 years 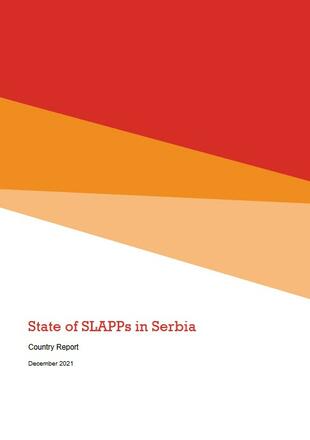 The recent wave of lawsuits against the investigative portal Network for Investigation of Crime and Corruption (KRIK) in Serbia , shows that SLAPPs are becoming an all too common tool for the rich and powerful to stifle critical voices in the country. In light of the upcoming parliamentary elections in April it is crucial that politicians acknowledge the dire consequences of legal harassment against journalists and denounce any form of pressure on independent media.

Based on the findings in this report, ARTICLE 19, ABA Center for Human Rights, and NUNS make some recommendations to the Serbian Government to ensure that
domestic legislation complies with international and regional freedom of expression standards and that legislation is not misused to stifle the work of journalists and human
rights defenders.

Among the recommendations, the invitation to review the provisions on defamation in the Media Law and the Law on Contracts and Torts, to ensure protection is provided only for false statements of fact which cause substantial damage to plaintiff’s reputation. Protection of vague concepts, such as piousness or authenticity should be eliminated.