State of SLAPPs in Spain

A country report published by Article 19, to describe how journalists and media outlets in Spain are facing multiple lawsuits for exposing corruption, reporting on matters of public concern or covering protests 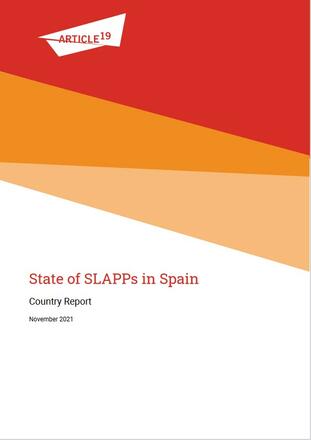 Those who file such suits aim to drain the target’s financial and psychological resources and to chill critical voices. These costly civil lawsuits target journalists, activists, or whistleblowers, in other words, individuals, who are often ill-equipped to defend themselves. As a result, public debate within Spanish society is under threat.

Among the findings of the research:

The Spanish Penal Code contains a number of problematic speech-related offences. These include criminal insult and defamation, offences against public officials and public institutions, and revelation of secret information. Despite the fact that the Courts are dismissing prosecutions for defamation and overturning convictions, the very existence of over broad legal provisions leaves them open to abuse,  creating a chilling effect on freedom of expression.

People with power target journalists simply for doing their jobs

The Spanish courts have set out relevant defences the media can use when doing their work. These include defences for ‘reasonable publication’ or ‘public interest’. They have also stated that public officials should tolerate a higher level of criticism than private individuals. Despite this, public officials who mismanage funds still misuse laws on honour, privacy, and reputation to target journalists.

Firstly, many journalists face permanent threats of criminal sanctions simply for doing their work. Secondly, they must bear the costs of legal proceedings.  In addition, they bear the negative consequences of investigations, sometimes for years, until a verdict is reached and regardless of the result of the judicial proceedings.

ARTICLE 19 considers that the Spanish Government should review the laws that limit people’s right to freedom of expression. This will prevent public officials, institutions, and influential individuals from bringing SLAPP cases against journalists and the media.