Amendments to the Law on Free Access to Information, adopted by the Montenegrin Parliament in May 2017, enable institutions to conceal information. Local NGO MANS denounces that the procedure is contrary to Constitution and European directives 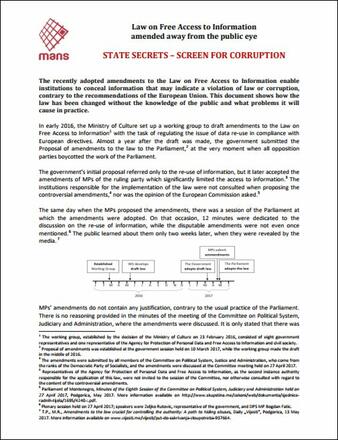 In its latest analysis, MANS warns that in May 2017 the Montenegrin Parliament adopted amendments to the Law on Free Access to Information which enable institutions to conceal information that may indicate a violation of law or corruption.

Institutions can restrict information in any field, violating Article 51 of the Constitution and contrary to European directives. So far, the authorities have carried out a so-called ‘damage test’ to determine whether it is more important to limit the access to information or to let the public know. Now the institutions are no longer required to conduct the damage test when declaring the secrecy of a piece of information. Potentially concealing information are secret data on public spending, large privatization and infrastructure projects.

The government has usually declared secret data on the spending of public money, as well as large privatization and infrastructure projects. Thus, information about the privatization of the largest state-owned companies, such as the Aluminum Plant Podgorica (KAP) and Telekom, where there were numerous allegations of corruption, were concealed for years. Now, all the information on highway construction, the largest infrastructure facility in the history of Montenegro, are being hidden the same way.

The government approved the ruling party MPs' amendments without consulting other institutional or European bodies, let alone the public who learned about the topic only when the media covered it two weeks later.