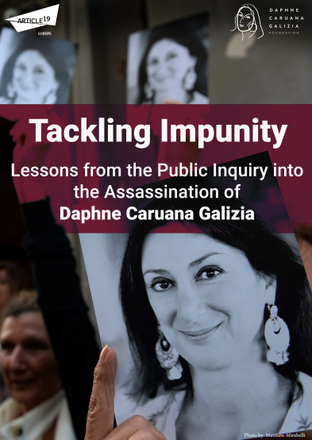 One year after the conclusion of the work of the Public Inquiry investigating on the infamous assassination of Maltese journalist Daphne Caruana Galizia, Article 19 and the Daphne Caruana Galizia Foundation have renewed their call to the Maltese Government to implement the recommendations formulated by the independent board. They have done so by publishing the report Tackling Impunity, whose goal is presenting a number of good practices identified by the Maltese Public Inquiry and to propose them as models for other countries. The report is structured in three main sections examining: 1) the role of public opinion; 2) the modus operandi of the Public Inquiry; 3) lessons learned.

Focusing on the decisive role played by public opinion, the first section of the document explores the mechanism that triggered a wave of indignation that compelled Maltese political authorities to appoint the Public Inquiry. Initiated by the Maltese journalist’s own family, the campaign for justice resulted in the family´s decision to establish the Daphne Caruana Galizia Foundation, with the specific aim of fighting and campaigning for journalists’ physical and intellectual integrity. Drawing attention on the limits of Maltese rule of law and its ability to protect media professionals, Galizia’s family established a dialogue with national and international civil society, international organisations and intergovernmental bodies, as well as international journalist associations.

The second part of the report examines the role of the Public Inquiry, which conducted their investigation in parallel to criminal investigations. Constituted in September 2019, the three judges composing the Board scrutinised the circumstances that led to the murder of Daphne Caruana Galizia. Providing ample evidence of the responsibility of public and political authorities in the assassination of the Maltese journalist, the Board urged the government to implement legal reforms and anti-SLAPPs measures necessary for assuring journalists’ safety.

Moving from the recommendations of the Public Enquiry, the third section of the document identifies a number of lessons learned. The report argues that impunity for journalists’ deadly attacks characterises a failing rule of law. The authors argue that, in cases of compromised justice systems, a parallel mechanism such as the one put in place through the Maltese Public Inquiry, or parliamentary inquiries, represents a valid option to force governments into action.

In conclusion, the report stresses the role of three major actors who have been instrumental in influencing Maltese policymakers and their decision to appoint the Public Inquiry.