Takeaway from final conference “How can gender equality and diversity promote trust in the media?” 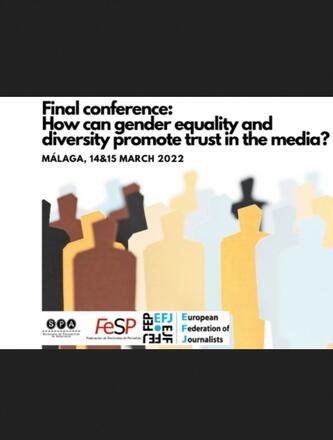 The conference also called for actions from media companies to step up their efforts and responsibility to make a culture change in the newsrooms. If the media wants to maintain trust from the audience, they must make news and the newsrooms more inclusive. Rosie Parkyn (Global Director of Impact, Internews) called for a bottom-up initiative capable of engaging community and transparency proactively. Similar suggestions were offered by academic researcher Amal El Mohammadiane Tarbift who highlighted the importance of gender and human rights approach in changing audience distorted perception.

With the slogan “diversify or die” Frank Jennekens  (NPO, Netherlands) emphasised that journalists must admit the unconscious bias we have and be aware of the choices we made when producing a story. One of the ways to ensure diversity and gender equality in the media is to have an inclusive workforce with more female journalists and those with diverse backgrounds, especially those at the top management positions in media companies.

According to the study presented by deputy Director of the Reuters Institute Meera Selva, there is no worldwide correlation between society and newsroom representation in terms of gender and diversity since “It is about power seen as a zero-sum game”. Concrete actions such as transparent job positions, family-friendly working conditions to achieve gender balance in the newsrooms, recommended Katrin Poetzsch (Advisory Board Member of the Bavarian Broadcast’s Equality Team). These steps can be collectively achieved by helping female leaders to do their first steps in the business: in such a sense TVE journalist Montserrat Boix Piqué sees an opportunity to implement the role of journalists’ union to make sure that competent female journalists get a chance to reach to the top.