A report by Reporters without Borders based on about 30 interviews with journalists, activists, lawyers and human rights defenders. It traces the development from the first bans on content in 2012 to Autumn 2019 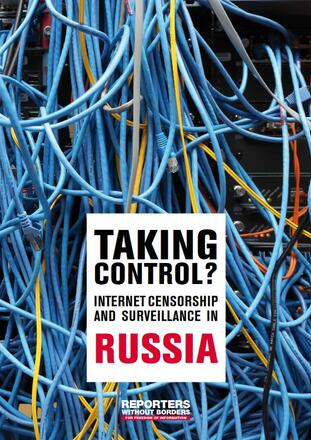 This overview shows how critical editorial teams are put under pressure in Russia and how the authorities attempt to silence individual journalists and bloggers. It also provides information about new online media that report on societal ills against all odds, and it raises the question about the relevance of international platforms for the freedom of expression in Russia.

Beside a chronology of  laws restricting press freedom and freedom of expression, it gives an overview of changes of ownership and dismissals, underlining the fact that every user risks prosecution.

Data about economic developments help understand the situation. More than three quarters of the population in Russia are online regularly, the Russian Association for Electronic Communications
(RAEC) estimates the number of active internet users to be roughly 93 million. In 2018, the digital economy accounted for roughly 4 percent of Russia’s gross domestic product, an increase of 11 percent
compared to the previous year, and the upward trend is continuing.

Among the recommendations, there are calls to the Russian government, to the governments of the European Union and to companies such as Facebook, Twitter and Google. Some recommendations are meant for journalists and media workers worldwide.