Targeted, cut off, and left in the dark

The #KeepItOn report on internet shutdowns in 2019 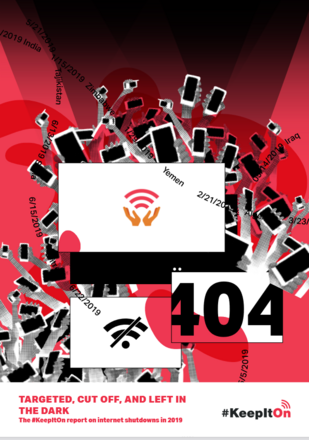 This #KeepItOn report looks at incidents of internet shutdowns in 2019. Data relies on technical measurement as well as contextual information, such as news reports or personal accounts.

There may be cases of internet shutdowns that have gone unnoticed or unreported, and numbers are likely to change if and when new information becomes available.

The #KeepItOn campaign unites and organizes the global effort to end internet shutdowns. The coalition is growing rapidly, and so far 210 organizations from 75 countries around the world — ranging from research centers to rights and advocacy groups, detection networks, foundations, and media organizations — have joined the movement.

From Bolivia to Malawi, India, Sudan, and beyond, 2019 was a difficult year, online and off. The #KeepItOn coalition has documented an increase in internet shutdowns1in 2019, as well as a trend toward sustained and prolonged shutdowns, and targeted internet shutdowns.