The Assault on Journalism

Drawing on the contributions to a UNESCO’s conference held in connection with World Press Freedom Day 2016, this Nordicom publication provides a thorough overview of worldwide research in the field of journalists’ safety 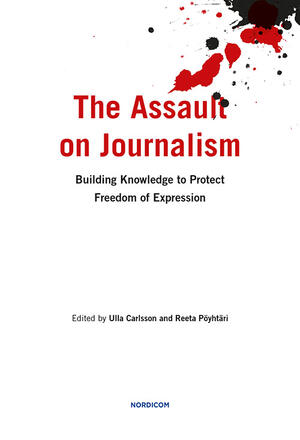 The publication “Assault on Journalism. Building Knowledge to protect Freedom of Expression” is based on the contributions to the UNESCO’s conference held in Helsinki, Finland, in connection with World Press Freedom Day 2016.

The volume is organised in four parts. The first is titled The status of safety of journalists. Key articles and, as remarked by curators Ulla Carlsson and Reeta Pöyhtäri from the University of Gothenburg, “should be seen as an analytical framework for all the chapters of this book”. More specifically, the United Nations’ role in raising awareness on the issue is analysed. Guy Berger, Director for Freedom of Expression and Media Development at UNESCO, explains “how the safety of journalists rose to occupy a top place within UNESCO’s normative work”, whereas Dr. Silvia Chocarro Marcesse shows how attempts to tackle the issue by the UN system have progressed much faster after the approval of the UN Plan of Action on the Safety of Journalists and the Issue of Impunity in 2012.

As the aim of the conference was to emphasise and stimulate safety of journalists as a field of research, the second part (The way forward) first scrutinises the UNESCO’s Research Agenda on the Safety of Journalists, created in 2015, including 11 broad areas:

Most of the research results in concentrating on practitioner issues (i.e. journalistic practices, ethics, and journalists’ safety), while barely covering societal and economic matters. In 2016, to advance academic research cooperation in this field, the Centre for Freedom of the Media (CFOM) launched the Journalism Safety Research Network (JSRN). The second focus area of this section evaluates the existing tools to measure safety through the meta-analysis of existing databases by Dr. Katharine Sarikakis from the University of Vienna and CFOM’s PhD student Sara Torsner. Both researchers highlight that freedom of expression organisations most commonly collect data on deaths (or killings) of journalists. As stressed by Dr. Torsner: “While representing the most ultimate form of censorship, killings constitute the proverbial tip of the iceberg of a whole range of different types of threats”. Dr. Sarikakis adds that existing databases are not identical qualitatively in terms of persons identified, as different definitions of journalists are assumed. In conclusion, further methodological rigour and standardisation are required to capture the complexity of risk.

The third part includes revised versions of papers presented during the conference. The chapters are divided into two main themes: 1. Threats and violence against journalists, and its effects; 2. Protection of journalists and sources. The fourth and final part is devoted to statistics of relevance to building a knowledge base on safety of journalists.