The Business of Misinformation: Bosnia and Herzegovina. LYING FOR PROFIT 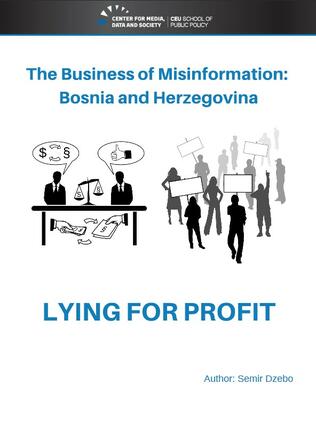 The main motivation of websites spreading misinformation in Bosnia and Herzegovina is profit generated via GoogleAdSense.

Another finding of this report is that established media outlets engage in misinformation practices either to compete for readers'` attention or on behalf of their political patrons.

Misinformation in Bosnia and Herzegovina is analysed through a classification of media outlets in four categories:

1. for-profit misinformation websites without real journalism, able to generate their own content by making up stories and reports or by attributing false quotes to individuals (usually politicians); they usually have a relatively short lifespan, particularly in the case of lesser known portals whose only purpose is financial gain for their owners;


3. real journalism websites with misinformation content and political propaganda, that also have printed editions; their political content is clearly aimed at portraying their political patrons in a positive light and their opponents negatively;

4. misinformation websites with consistent political propaganda, with no information on who their journalists and editors are; their content (both misinformation content and general content) is primarily political and aimed at criticising those who have opposing views.