The European "migration crisis" and the media. A cross-European press content analysis

A report on the press coverage of the migration phenomenon in eight European countries, and the consequences of media representations for public opinion and policy choices 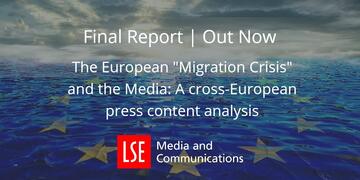 The arrival of refugees and migrants to Europe became a trend media topic in the last years and a controversial issue in public debates. European media played a critical role in framing the issue. In particular, it was framed as a “crisis”, relying on a view of the newcomers as vulnerable or dangerous “Others”.

This report focuses on the press of eight European countries in the last six months of 2015. The choice to focus on the press stems from the fact the authors consider that, despite the important role of social media, mainstream media still have a paramount impact. The analysis focuses on (i) narrative of the “crisis”, (ii) geographical trends across Europe, (iii) challenges to policy making, especially in relation to hate speech and freedom of expression.

Among the report’s findings, information about who these people migrating actually are was absent or marginal in most of the European press coverage. Overall, media paid little attention to the context of the migration phenomenon. Moreover, the narrative changed dramatically after the November 2015 Paris attacks. Institutional players had a dominant voice instead of migrants themselves or European citizens.

Media continue to face challenges in safeguarding the values of independent, fair and ethical journalism. Thus, analysis of media representations and their consequences in the migrations’ context is crucial. As to the media, the inclusion of diverse voices, a contextual reporting of migration, a recognition of refugee journalists and more research on migration and its appropriate coverage is recommended.