The Expression Agenda 2017/2018. The state of freedom of expression around the world

ARTICLE 19 report shows sharp decline in global freedom of expression since 2014, and a continuous decline over ten years

Publication Date: December 2018
Publisher: ARTICLE 19
Link: The Expression Agenda 2017/2018. The state of freedom of expression around the world 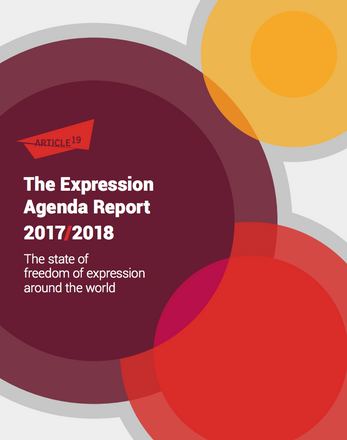 Demonising the media: Threats to journalists in Europe

Targeting the Messenger: Journalists on the Frontline of Protests

This annual report based on the metric Expression Agenda (XpA) , which uses independently collected and verified data to give a comprehensive picture of the state of freedom of expression around the world, measures freedom of expression in five areas: civic space, digital freedom, media freedom protection and transparency. According to XpA, these five elements combine to create an enabling environment for expression and information and moves us closer to a world where everyone has the right to speak and the right to know.

The area that showed the greatest rate of decline in 2017 was media freedom. According to the report, media freedom declined in 48 countries between 2014-2017: global statistics are chilling: 78 journalists, and 312 rights-defenders were murdered in 2017. A record of 326 journalists were imprisoned for their work worldwide: 174 are behind bars in Turkey only. The report highlights that the most vulnerable voices are those of local reports and activists.

The report shows that the decline in freedom of expression is accelerating worldwide, including the world largest democracy, and three EU countries, Poland, Croatia, and Romania. Among the EU countries, the report focuses on Poland which shows a particularly worrying trend since “independent journalists and media outlets faced incrimination and state media was moved under government control”, as the report reads. Also, the study highlights that one of the most worrying developments has been the decline of media freedom in the United States, a country that has strong freedom of expression protections. According to the authors, the situation in the United States has been made worse by the Trump administration’s open hostility to the media.

Fake news and the rise of “strongman politics” are also issues dealt with the in the report which points out that the narrative of “fake news” has been seized upon by world leaders to openly attack the media, and that the global decline in freedom of expression goes hand in hand with the rise of “strongman” politics, characterized by leaders such as Turkey’s Recep Tayyip Erdogan, Russia’s Vladimir Putin and Hungary’s Viktor Orbán.

Moreover, the report focuses on the role of technology and tech companies: technology and the Internet unable expression in near real time, but are also used to block communication and prevent access to content, and facilitate electronic surveillance on an unprecedented scale. In 2017 Internet censorship emerged as a significant driver of decline in national XpA scores. Another emerging issue is that a small number of very large tech and social media corporations dominate communications between individuals, and civil society. The report points out that the root of the problem is an asymmetric power relationship with limited transparency and gaps in oversight and accountability. According to the report, the decline of freedom of expression goes hand in hand with the decline of transparency: when transparency is limited, institutions are less accountable.

The report is divided in three parts: the first provides a thematic overviews based on the five elements of free expression, as defined by the XpA. Global trends are thus illustrated for each of the five components, i.e. civic space, digital, media, protection and transparency. The second chapter provides regional overviews, and final chapter explains the XpA methodology and the way the indicators composing the index are shaped and measured.

The Expression Agenda (XpA) metric is an authoritative assessment of freedom of expression and information worldwide. First published in 2017, the metric was commissioned by ARTICLE 19 and is based on the global data set developed by V-Dem (Varieties of Democracy) Institute, which uses a range of indicators to measure freedom of expression in 172 countries. V-Dem have also used historic data to identify the major free speech trends of the last ten years.