Article 19 has joined the social science database V-Dem to launch a unique, authoritative assessment of freedom of expression and information worldwide 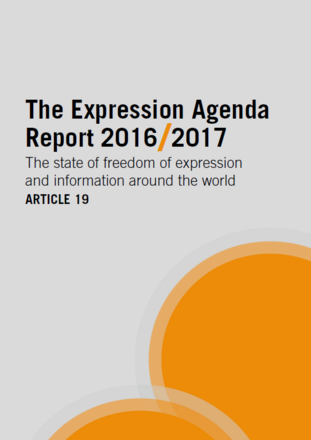 “We are witnessing a time when governments worldwide are retreating from the commitment to human rights. Freedom of expression is often the first casualty: censorship in the name of national security, new laws to protect us from offensive speech, and unprecedented surveillance of our private communications. It is more important than ever to remember why the protection of freedom of expression is an essential condition of our liberty”. With these words, Thomas Hughes, the Executive Director of Article 19, opens a report which aims at measuring Freedom of expression worldwide.

Although Freedom of expression is often considered to be too abstract a concept to evaluate comparative progress rigorously, according to this study the lack of a global measure should not prevent mobilising resources to protect this fundamental right. That's precisely why Article 19 worked in partnership with the Varieties of Democracy (V-Dem) Institute, whose multidimensional dataset examines 350 aspects of democracy and provides a new approach to measure “a system of rule that goes beyond the simple presence of elections”. With V-Dem’s new approach to measuring democracy, the findings of Article 19 Expression Agenda (XpA) metric reveal the key threats facing freedom of expression and information, while providing policymakers, activists and journalists new source of insight and a tool for organizations lobbying for freedom of expression.

This report provides a comprehensive picture of the state of freedom of expression in 2016 by analysing 32 indicators aggregated into five indices: civic space, digital, media, protection and transparency. Unfortunately, its findings show that freedom of expression is under attack in democracies as well as authoritarian regimes. Looking at global trends, there is much cause for concern: since 2006 (a year in which both Facebook and YouTube were in their infancy and Twitter had just been created) there has been a notable restraint of civic space, while digital censorship has dramatically increased; media pluralism itself is nowadays on the retreat in many parts of the world (among other countries, Brazil, Turkey, Burundi, Egypt, Poland, Venezuela, and Bangladesh have all witnessed disturbing drops in a diverse and independent media). Concerning protection, over the past decade nearly 20 countries experienced a decline against the indicator that measures harassment of journalists, compared to improvements in just nine countries. On the contrary, transparency and accountability have seen significant progress: following what could be described as a “transparency revolution”, the right to information has now been adopted into law or policy in 119 countries around the world, and is recognised as a necessity for the functioning of governments across the world.

This report is considered to be a work in progress: Article 19’s partnership with V-Dem will support the development of additional, relevant indicators in the global dataset.