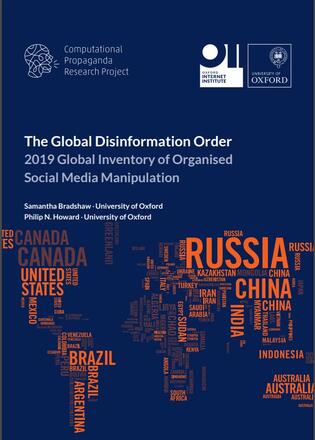 IJF19: Technology and automation in the fight against misinformation

IJF19: Beyond fake news: what's next for tackling online misinformation

This report examines the use of computational propaganda by the so-called “cyber troops” (government or political party actors that manipulate public opinion online) in 70 countries.

Strategies, tools, techniques, illegal harvesting of data, trolls, and bots: these elements are classified in a sort of inventory.

Communication strategies include the creation of disinformation or manipulated media, mass-reporting of content or accounts, data-driven strategies, trolling, doxing or harassment, and amplifying content and media online.

According to the authors, thanks to high volumes of information and limited levels of user attention and trust, computational propaganda is becoming very common. Among the countries examined: 87% used human accounts, 11% used cyborg accounts, 7% used hacked or stolen accounts, and 80% used bot accounts.

These are the main findings:

1. social media are used to shape public attitudes at least by one political party or government agency in every country. The number of countries where it happens increased from 28 in 2017 to 48 in 2018 and 70 in 2019;

4. China has become a major player in the global disinformation order;

5. Facebook remains the platform of choice for social media manipulation.