The Global Expression Report is ARTICLE 19’s most comprehensive, data-based report that tracks freedom of expression across the world 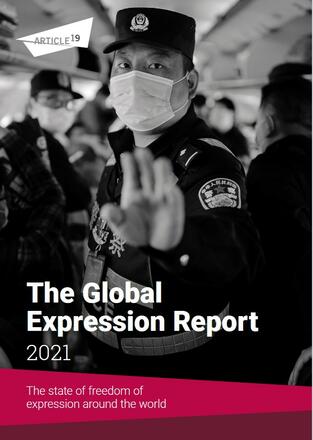 The GxR metric measures how free each and every person is to write, to post online, to march, to teach, to access knowledge and information, to share it freely, and to hold those with power to account.

The metric looks at 25 indicators across 162 countries, to create an overall freedom of expression score for every country on a scale of 1 to 100.  Based on the score, we place countries into one of five categories.

Over the last ten years the largest rises in scores have been in 3 countries.

Protest has been a key catalyst for changes in Armenia while there have been sustained gains in public decision making in Tunisia and The Gambia.

Two out of every three people in the world or – 4.9 billion people – are living in countries that are highly restricted or experiencing a free expression crisis, more than at any time in the last decade.

Here some of the main findings:

Which elements of expression have been affected the most?

Disinformation spread across the world faster than any virus could. Government responses to address it are vague and open to abuse.

Some states and officials even spread disinformation themselves, while whistleblowers and reporters raising the issue were silenced, harassed, or detained.

The most common democratic violation in relation to the pandemic were restrictions imposed on the media. Populist governments have abused public health measures to attack the free press.

Those who seek to entrench their power hate accountability which is why we have seen attacks on journalists and online censorship intensify in many countries.

Increased surveillance also posed a threat as millions were asked to download apps that collected highly sensitive data without adequate measures for privacy and data protection.

All over the world during 2020 public participation was dismantled: decisions were made without consultation, oversight was undermined, powers were centralised, and accountability limited.

Giant tech companies continue to control what we see and share online without proper accountability to people.

The systems of checks and balances against excessive power are weakening: global governments and big corporations have grown more powerful while independent media and NGOs have been hit financially.

Rather than focusing on controlling the virus many governments have instead wasted public money and time on trying to control the narrative about their response to COVID-19.

In doing this, they have suppressed critical reporting and political opposition – particularly around elections.