The report, written by digital media scholar Whitney Phillips for Data&Society, shows how the far-right manipulated the media in 2016, discusses the relation between reporting and amplifying extremist ideology and suggests some tips to journalists on when and how to cover online harassment campaigns and manipulations 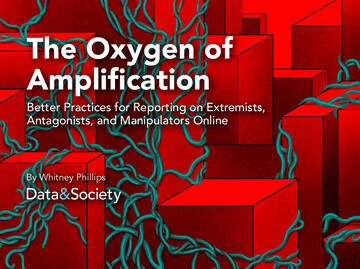 Part one deals with the role of alt-right trolls and memes in the 2016 United States presidential elections, that resulted in Donald Trump becoming president. The work was based on fifty interviews conducted by the author, mainly with journalists.

Phillips distinguishes the respondents between those who are troll-trained (usually the youngest ones) and those who are not (the oldest ones). This second category, together with a third category of people rejecting the "troll" idea, is the one more likely to amplify the trolling content.

Part two deals with the assumption that reporting means amplifying, which in many cases is just the objective of the action that is being reported. However, this does not mean that rules of newsworthiness can be sacrificed to the purpose of not amplifying by non reporting. Not amplifying may also lead to other problems. Moreover it does not necessarily make the problem disappear. On a different level, another less noble factor pushing for reporting on such stories is that they are cheap to write (you just need a computer) and they are often good for page views.

Part three gives tips to journalists on newsworthiness, and, when this is established, on how to report on information which is objectively false, specific harassment campaigns or other coordinated manipulated attacks, specific manipulators, bigots, abusers and the internet in general.

Such editorial policies and best practices are not new to journalism, but they may need to be adapted to the current situation. As an example it is suggested that the coverage of violent antagonism should be similar to the coverage of suicides, which is considered to be contagious. Vague mass nouns should not be used and the number of participants to an attack or campaign should be specified. "Both sides-ism" should be avoided: the point of view of the attackers and the attacked should not have the same dignity. Journalists writing about on-line communities and behavior should be informed on what they are writing, including e.g. the history of a  meme.