The Panama Papers and the importance of protecting whistleblowers

A study assessing the impact of the schemes revealed by the Panama Papers makes several recommendations, including for the EU to introduce measures for the protection of whistleblowers 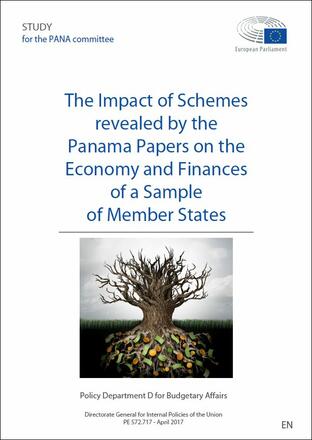 Upon request by the European Parliament’s Committee of Inquiry to investigate alleged contraventions and maladministration in the application of Union law in relation to money laundering, tax avoidance, and tax evasion (PANA Committee ), this study assesses the impact of the schemes revealed by the Panama Papers, a set of documents leaked from the law firm Mossack Fonseca detailing tax evasion and avoidance practices, and published by the International Consortium of Investigative Journalists (ICIJ) in April 2016.

The study explores the concepts and roles of tax havens and offshore financial centres, their budgetary, and the economic and financial impact in a sample of EU Member States. The research combines previous estimates of tax revenue loss with a microeconomic assessment based on data on companies that are thought to be linked to the Panama Papers schemes. The most significant impacts identified are the negative effects on Member States’ budgets, with wider knock-on effects on economic growth and financial markets. It is recommended that further steps are taken at the national, EU, and international levels to increase transparency of corporate and individual taxation and to limit the scope for tax evasion and tax avoidance.

In terms of scope, the research focused on the following EU Member States: Cyprus, the Czech Republic, Denmark, France, Germany, Poland, Spain, and the United Kingdom. Some of these countries featured heavily in the Panama Papers due to nationals either benefiting from the schemes or the associated intermediary activity.

The study makes several recommendations, including introducing measures to guarantee the protection of whistleblowers. “This will improve the availability of the data and act as a driver against the use of tax haven schemes”, the report says. More transparency is also suggested in order to better monitor and prevent the use of such schemes.