The Right of Access to Information in Cyprus. Report and Recommendations

A report collecting the findings of a research on the right of access to information in Cyprus, conducted in 2010 by Access Info Europe, KAB and IKME as part of the Access Info Cyprus Project 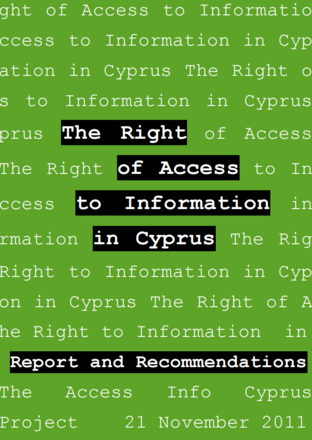 The Access Info Cyprus Project is a two-year civil society initiative to promote improvements in government transparency and accountability and to increase public participation in decision making in Cyprus.

With regard to the northern part of Cyprus, the laws under analysis are the Right to Access Information Law (2006), the Public Officials Law (1979) and the Personal Data Protection Act (2007). As to the Republic of Cyprus, the relevant regulations are: the 1960 Constitution, the Act regarding Personal Data (2001), the Law on Re-use of Existing information held by Public Sector Bodies (2006), the 1989 Press Law, the Environmental Information Law (2004), the State Archives Law (1991), the State Secrets Law (2002), the Public Service Law (1990), the Public Procurement Law (2006), the Public Aid Law (2001), the 1999 Administrative Principles Law and the Charter of Citizen’s Rights.

Later, the research focuses on the obligation to make information available in a proactive manner, through the monitoring of public websites. Public bodies often fail to proactively publish key classes of information on their websites. The absence of financial information was particularly noticeable. Similarly, there was an absence of online information about the public procurement. The research makes also a monitoring of 20 public bodies in Cyprus with a total of 393 information requests submitted. The performance of the public bodies monitored was very poor with only 9% of information requests resulting in the release of any information at all. In more than 70% of the cases, the lack of a response was due to administrative silence. Moreover, there was a very high level of “non-compliant” responses, at 80%. Nearly nine in every ten requests (87%) were processed and responded to in a way that is not compliant with access to information standards.

Finally, this dissertation includes interviews with public officials. The findings of the interviews show public officials’ attitudes to the right of access to information. The responses also demonstrate how the political situation on the island affects the way in which Public Officials perceive the need for transparency and the functioning of their administrations as regards access to information. Limits to the right to know are often based on national security grounds and on the need of protection of personal data. This research found a prevailing culture of secrecy: public officials fear legal sanctions for having revealed public information.

This draft report contains sections on the findings of each of these seven stages of the research along with recommendations for the measures that should be taken by public authorities to improve levels of public access to information.