The State of Democracy in 2021

The report monitors ten issues that are essential for evaluating the state of democracy and rule of law in a country. Among them, it analyses access to information of public interest, public media funding, threats and harassment against journalists and activists, freedom of association and of assembly in Romania 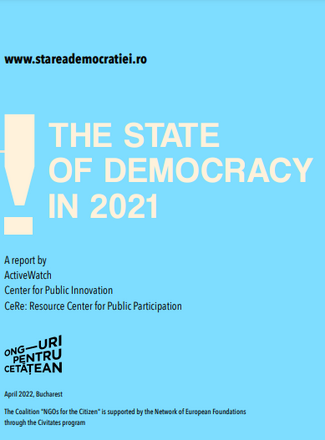 In 2021, there were no improvements in the protection of civic space and civil liberties in Romania. Stagnation and persistence of the same problems is how the report State of Democracy describes year 2021: decent legislation poorly applied or ignored. The projects aimed at improving legislation in the field of public information and public meetings are still blocked in the Parliament, and no positive changes to relevant legislation occurred throughout 2021. Instead, counterproductive decisions, such as the amendment of the law regarding transparency, have been made. A Subcommittee on Civil Society of the Chamber of Deputies should have taken into account legislative needs on issues related to the civic space, but no debates or public meetings were held in 2021. Freedom of information and freedom of the press continue to be severely affected either by the refusal to provide information of public interest or by harassment (including physical harassment) of journalists. State institutions and political parties have continued to channel public money into the media in a non-transparent manner, thus contributing to eroding public trust in the media. The public debate on public decisions, both at the central and local levels, is still insufficient.

In this summary, we take a closer look at the developments in the field of access to information, media and protection of sources.

At the beginning of 2021, on the agenda of the Chamber of Deputies there were positive amendments to Law no. 544/2001 regarding free access to information of public interest. The proposal, which had already passed in the Senate, would lead to improved access to public information thanks to the introduction of an obligation for public institutions to organise a special section on their website in which all the requests and answers would be published. However, the process is stuck in the Commission on Culture, Arts and Mass Media. During this time, citizens and civil society organisations continue to face problems in law enforcement, especially when dealing with political parties.

The government and political parties keep infusing resources into the media market either in information campaigns or in campaigns to promote the agenda and image of parties. The fund of about 200 million lei for the press allocated by the Orbán Government in 2020 further unbalanced the market, as ten actors concentrated 50% of the money. In 2021, although it has been a year without electoral stakes, political parties have invested significantly in promotion campaigns (about 46 million lei). This mechanism raises major issues of transparency. Likewise, local authorities are engaged in public funding for the press, and the opacity is even greater than in the case of political parties or the Government. Little information about these procedures reaches the public. When it does, it appears that some media are often selected preferentially. As a consequence, the reputation of and the trust in the media as a whole is continuing to erode.

Attacks against the press initiated by politicians are common, and result in coordinated defamation campaigns which contribute to the narrative of the media as an enemy and not as a key player for democracy.

Although the condition of media workers is generally poor, the report recorded a positive development in 2021. At the beginning of the year, the mayor of Bucharest Nicușor Dan announced the drop of the lawsuits filed by the former mayor against several journalists and media outlets. For each lawsuit initiated, the former mayor demanded compensation of 100,000 euros, an amount that shows the level of pressure exerted by politicians on the press. Although this can be considered a victory, the phenomenon of pressure from the authorities on the media remains worrying. This can discourage public interest journalism and divert the attention and resources of journalists who have to defend their reputation and editorial independence.

In 2020, the Ministry of Transport and Communications put into public debate the draft law on amending and supplementing normative acts in the field of electronic communications, which aims to transpose the EU Directive 2018/1972 on the establishment of an European Electronic Communications Code. The project passed the Chamber of Deputies in December 2021 and was sent to the Senate, which enacted it in March 2022. However, a new article has slipped between the public debate and the form adopted, which unjustifiably broadens the scope and spectrum of electronic communications interception, including access to traffic data, content data and content of encrypted communications. This article would add worrying aspects in the field of wiretapping, and providers of communication services that are not based on numbers would be obliged to assist bodies in charge of national security. The Coalition NGOs for the Citizen submitted an open letter to demand the removal of this article. A verdict is expected from the Constitutional Court after several deputies filed a complaint of unconstitutionality.