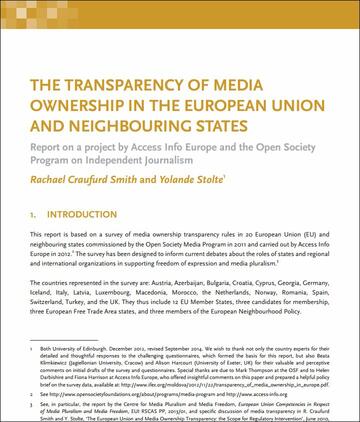 The survey has been designed to inform current debates about the roles of states and regional and international organizations in supporting freedom of expression and media pluralism. Media ownership transparency underpins a number of constitutional guarantees and individual rights, notably freedom of expression and a functioning, inclusive, democratic process. It is also a precondition for media pluralism.

The report exposes the connection between media ownership transparency and the functioning of democratic systems; it then considers how the transparency of media ownership is regulated by the constitutions of the countries under examination. The study then moves on to scrutinize how access to information about media ownership is guaranteed to public bodies and/or directly to citizens. Recommendation are provided at the end of the study.

Remarkably, out of the 20 countries scrutinized in this report, none includes in its constitution the positive obligation on the state to ensure that the public has access to information on media ownership. Applicable measures have often been established with the aim to provide information to media regulators or for company law purposes. As existing regimes fail to provide citizens with adequate information on media ownership, citizens are unable to establish who owns or controls the media operating in their country.