The Trust Factor: EJN Review of Journalism and Self-regulation

How to build trust with the audience in modern journalism 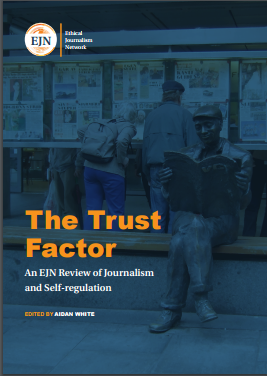 This report by the Ethical Journalism Network examines self-regulation mechanisms for journalism considering cross-cutting challenges as well as country-specific situations.

The point of departure for this analysis is that the need for responsible and accountable journalism is greater than ever, but its regulation remains dominated by old-fashioned notions of how media work. How is it possible to develop accountability systems in tune with the new era of information?

Across the globe there are dozens of regulatory bodies working at national level to regulate journalism. Some are defined by law and some are genuinely self-regulating – that is, they are managed and paid for by the industry and by journalists’ groups. The report investigates and compares different media landscapes, including Western Balkans and Hungary; Venezuela; South Africa; Egypt, Pakistan, Brazil, Norway. The Netherlands and United States are also examined. These country reports confirm that effective and credible self-regulation only exists in a small number of countries and varies dramatically in different parts of the world and even within regions.

The convergence of communications technologies has rendered obsolete the traditional divide between broadcast and print journalism, but in most countries there are still different mechanisms for regulating journalism: usually, a voluntary system applies for the press and legal controls over broadcasting.

These structures were created for yesterday’s media landscape and are increasingly out of date. Today’s digital journalists work on video, print and audio simultaneously. That’s why it makes sense to have only one national regulator, and one that covers all platforms of journalism. As this report shows, making self-regulation work at enterprise level is perhaps what counts most.

Building trust with the audience should be an issue in every newsroom and the growth in the number of in-house ombudsmen or readers’ editors is a welcome sign that more media are taking the issue seriously.

The report is complemented with a Checklist for Self-Regulation at the Level of the Individual, at the Enterprise and Industry level.

Adapted from the report's "Introduction " section.