The authorities vs. the citizens. ‘In the crosshairs’ namely SLAPP Polish-style

Polish independent news service OKO.press, supported by the Rafto Foundation, prepared a report about SLAPPs. The report is based on 21 interviews with activists and lawyers, as well as discussions with activists, including in courts and at police stations, not only with the accused and charged, but also with those who came to demonstrate their support 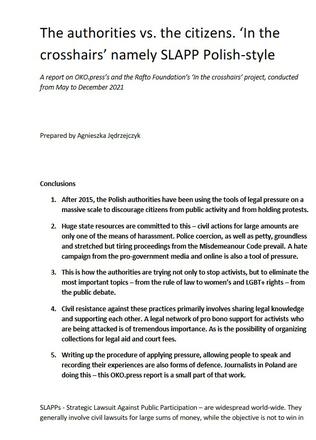 After 2015, the Polish authorities have been using the tools of legal pressure on a massive scale to discourage citizens from public activity and from holding protests.

Huge state resources are committed to this – civil actions for large amounts are only one of the means of harassment. Police coercion, as well as petty, groundless and stretched but tiring proceedings from the Misdemeanour Code prevail. A hate campaign from the pro-government media and online is also a tool of pressure.

This is how the authorities are trying not only to stop activists, but to eliminate the most important topics – from the rule of law to women’s and LGBT+ rights – from the public debate.

Civil resistance against these practices primarily involves sharing legal knowledge and supporting each other. A legal network of pro bono support for activists who are being attacked is of tremendous importance. As is the possibility of organizing collections for legal aid and court fees.

Writing up the procedure of applying pressure, allowing people to speak and recording their experiences are also forms of defence. Journalists in Poland are doing this – this OKO.press report is a small part of that work.