The backfire effect happens when debunking an ideological belief reinforces rather than weaken the belief itself. Full Fact’s Research Manager Amy Sippitt reviewed seven studies about backfire effect, concluding that it may occur only in some cases

Publication Date: March 2019
Research and Editorial Team: Amy Sippitt
Link: The backfire effect: Does it exist? And does it matter for factcheckers? 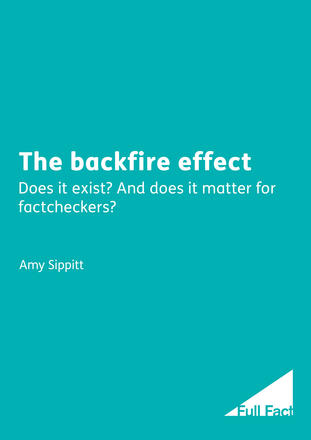 Fact checking online is more important than ever

The author focuses on seven highly referenced experimental studies on the effects of debunks of factual claims.

Evidence of backfire effect were found by a 2010 study by Brendan Nyhan and Jason Reifler which is often referenced. However, the claim involved a highly controversial topic about which people would have prior beliefs (Iraqi weapons of mass destruction) and was complicated and ambiguous. Moreover, when using a simplified claim, researchers found no evidence of backfire, but only a neutral effect, and the sample was not large (200 undergraduates).

In 2012, Nyhan and Reifler conducted a larger study (900 participants) with Peter Ubel. They tested a false claim by Sarah Palin, and found backfire only among her supporters with high political knowledge. Other studies have found evidence of backfire only for behavioural intent, not for specific claims.

A 2018 study by Thomas Wood and Ethan Porter, involving over 10,000 people, concluded that - on average - fact-checking results in a more factual attitude, and that it is difficult to find backfire effect. However, more complex statements decreased the effect of the debunk among conservative respondents.

In another study, Nyhan, Porter, Reifler, and Wood tested two claims by Donald Trump about crime and unemployment among Republicans and Democrats during the 2016 US Presidential elections. They conducted two studies: one with 4,200 participants (3,000 from Mechanical Turk and 1,200 from a nationally representative sample) and one with 1,500 MTurk participants. They found that fact-checking reduced misperceptions among both Republicans and Democrats. Including criticism of the debunk by a Trump staffer reduced the effect of the debunk on Trump supporters. While the beliefs became more accurate even among Trump supporters, they tended to view articles as less accurate when used for debunk, and their attitude towards Trump did not change.

A study by Briony Swire, Adam Berinsky, Stephan Lewandowsky, and Ullrich Ecker also tested statements by Donald Trump with 1,800 participants from Mturk in a study and 1,000 participants from a national US sample in another, finding no evidence for a worldview backfire effect.

The same authors later did a study on a smaller sample of 370 Australians, testing debunk of statements by politicians from opposing parties. They found debunks working both for left-wing and right-wing participants. The authors point out that the claims were unlikely to challenge strong beliefs.

Brendan Nyhan and Jason Reifler did a non-peer reviewed study on the 2014 US midterm elections. Their experiment involved 1,000 Americans that were exposed to factchecks or press releases (both from Democrats and Republicans, some true, some half-true, some false). They found factchecks significantly improving the accuracy of people’s beliefs, mostly independently from their political position. It may be significant that the experiment was organised so that participants had to read the factchecks very carefully.

While the review suggests backfire effects are not the norm, more evidence is needed, especially outside of the United States, where most studies have been conducted.