A report by the European Broadcasting Union (EBU), explores European citizens’ perception of the trustworthiness of several types of media 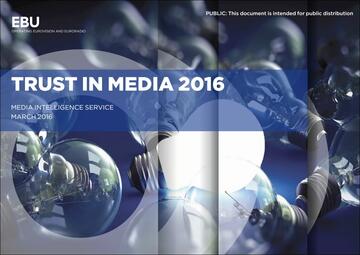 Based on the data published in the 84th Eurobarometer survey , this report considers the level of trust towards different types of media in EU Member States as well as acceding and candidate countries.

Trust is defined as an individual’s perception of the reliability of media, and it is the result of socio-economic conditions and education, specific events and long-standing perceptions: media organizations can work to increase trust on a mid- and long-term basis by championing credibility and authenticity, however, the results will not only be related to their performance and values but also to external factors beyond the organizations’ control, e.g. cultural or economic aspects.

The types of media included are television, radio, the written press, the Internet, and since 2014, also online social networks.

The results show that radio is the most trusted medium in Europe (in 20 out of 33 countries; 55% of citizens trust radio), while TV is generally the most trusted in south-eastern Europe. The lowest level of trust is recorded for written press (50% distrust) and online social media (55% distrust). Overall, a general negative trend is noted: trust decreased across all media during the last 5 years.