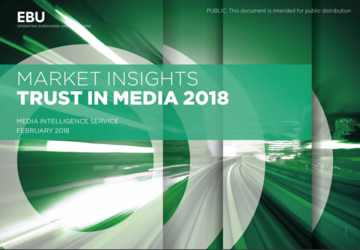 The EBU (European Broadcasting Union) annually releases a report on Trust in Media in Europe that includes the Net Trust Index, which is the difference between the percentage of the population who tend to trust the media and of those who tend not to.

Based on the 86th Eurobarometer survey, the 2018 report finds that broadcast media - radio and TV - remain the most trusted media outlets throughout Europe, even increasing the level of trust compared to 2017. Radio is the most trusted media in Europe (59% of the population), whereas social media are trusted the least in 28 countries out of 33 surveyed. For the first time in 10 years, the proportion of countries that tend to trust the written press (58%) is greater than those that do not (42%).

When asked about the general level of trust in media, Albania has the largest proportion of citizens with high trust levels, followed by Nordic European countries. In Malta, Macedonia, Serbia, and the UK, the majority of the population does not trust the media. As observed by various national and international studies, trust in media is at an all-time low, especially because of the rise of misinformation and disinformation online: ‘offline’ media may regain trust if they invest in quality journalism.