Turkey: Freedom of Expression in Jeopardy

The report, written for English PEN by two human rights experts, provides an overview of the state of freedom of expression in Turkey after the attempted coup in July 2016 and engages in a critical evaluation of the violations of the rights of writers, publishers, academics and within academic institutions 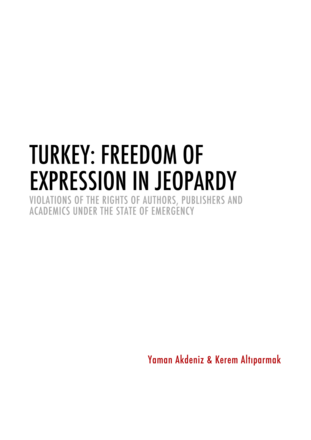 Firstly the authors present a historical evaluation of the country’s media freedom and freedom of expression records as a member state of the Council of Europe (CoE), stating that Turkey “has always been one of the most restrictive countries” among the member states of the CoE. They support their statement by data on judgements issued by the European Court of Human Rights (ECtHR):

According to the writers, significant improvements made in consideration of these judgements were overshadowed by the limited approach of Turkish local courts in implementing the ECHR standards. “For the past twenty years, the main issue restricting public debate in terms of Turkish laws has been the prosecution and imprisonment of journalists, writers and intellectuals on the grounds that they contribute to violence and terrorism”. Accordingly, the main themes in cases of freedom of expression brought before the ECtHR against Turkey are terrorism and violence.

A number of changes have taken place in regards to the restriction of freedom of expression in Turkey in the last 40 years.

The report affirms that currently “Turkey is going through a period in which anyone thought to be in the opposition, including but not limited to academics, members of parliament, artists, journalists and writers, can be investigated, arrested and prosecuted for disseminating terrorist propaganda or for being a member of a terrorist organisation”.

The writers also survey the changes that have occured over time in the means adopted to fight terrorism. Whereas in the 80s and 90s the methods employed were “rough", under the rule of the AKP they have become more “subtle and sophisticated”. For instance, physical attacks against journalists have become rare and incidents of torture and ill-treatment of students and intellectuals are exceptional. On the other hand, it is said that a flimsy pretext is enough to file a criminal case against anyone who criticises the government, while the accused are found guilty in most of the cases.

Other means mentioned in the report to limit freedom of expression include:

The report also provides statistical data on the effects of the State of Emergency that has been declared by Turkish authorities after the attempted coup, and which currently enforced: