The mission, consisting of representatives of International Press Institute (IPI), ARTICLE 19, European Federation of Journalists (EFJ), Committee to Protect Journalists (CPJ), PEN International, Norwegian PEN, Reporters without Borders (RSF), and European Centre for Press and Media Freedom (ECPMF), reports that the press freedom environment in the country has not improved since the lifting of the state of emergency in July 2018 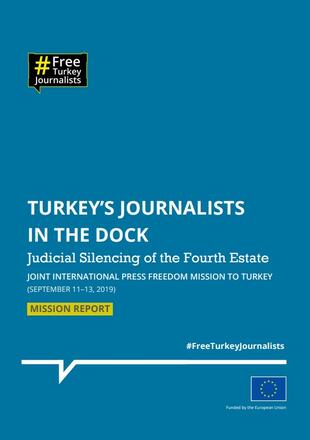 From September 11th to 13th, 2019, the mission led by IPI met the Turkish Constitutional Court, the Supreme Court of Cassation (Yargıtay), the Turkish Ministry of Justice, the Delegation of the European Union to Turkey, the Foreign diplomatic missions in Turkey, and a roundtable of Turkish civil society and journalism groups.

More than 120 journalists are behind bars and hundreds are facing trials on terrorism-related charges: Turkey is, and has been for almost a decade, the undisputed leading jailor of journalists worldwide. The mission also tried to visit some journalists in jail but, after a positive initial response, the visit was not possible due to explanations given in the last minute.

One of the findings concerns the judicial reform strategy (JRS), announced in May 2019 by the Turkish government to address flaws in the justice system: the report states that it “will not be credible unless it guarantees judicial independence in both law and practice and ends the arbitrary persecution of journalists”. Now, there is evidence of political interference in the judiciary, especially when the rulings of the Constitutional Court on freedom of expression cases have been met with resistance and obstruction in the lower courts.

“The mission recognizes the terrorist threat in Turkey but rejects arguments made by the Supreme Court of Cassation that this justifies exceptional measures outside ECtHR jurisprudence and that fundamental freedoms need to be compromised in the name of security”.

The delegation welcomed the Supreme Court of Cassation’s ruling to overturn convictions for defendants in the Cumhuriyet trial. But two months later, in November, this ruling was not accepted by the lower court that confirmed its own decision of April 2018.

The delegation was profoundly alarmed by the new powers of Turkey’s audio-visual regulator, the Radio and Television High Council (RTÜK), that extend the agency’s control to online broadcasters, threatening their existence through a costly and opaque licensing regime.

The delegation expresses concern about the abuse of anti-terrror laws, the arbitrary prosecution of journalists, the misuse of travel bans, the political interference of the judiciary, the system of press accreditation, the block of websites, including Wikipedia, banned in Turkey for two-and-a-half years, and about the lacking of respect for the rulings of the Constitutional Court.