Eleven international freedom of expression, journalists’ and human rights organizations carried out a joint mission to Turkey on October 6 to 9, 2020, meeting with media professionals, civil society actors, judicial and regulatory authorities, members of parliament and representatives of diplomatic missions, for the purpose of reviewing the status of media freedom in the country 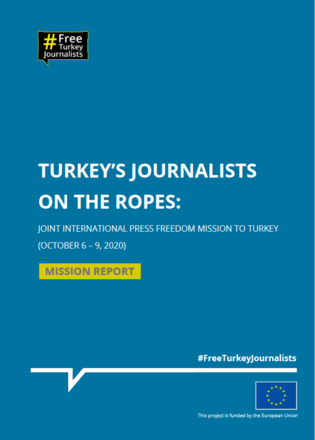 The mission was organised in the wake of the Covid-19 pandemic, the sharp rise in targeting of media by regulators, increased physical attacks on journalists and a new restrictive law on social media with the potential to impose further limitations on the remaining spaces for independent reporting and public commentary.

Turkey’s press freedom crisis is worsening amid growing state capture of media, the lack of independence of regulatory institutions, and a new social media law designed to clamp down on the remaining spaces for free comment, a coalition of 11 internationalpress freedom, journalism and human rights groups warned following a four-day mission to the country last week. They also flagged the continued jailing and prosecution of journalists as well as ongoing concerns over the safety of journalists and judicial independence.