How did the UK press cover the EU Referendum? What were the main stories and issues deployed on each side of the argument? A new report from the Reuters Institute for the Study of Journalism examines these issues 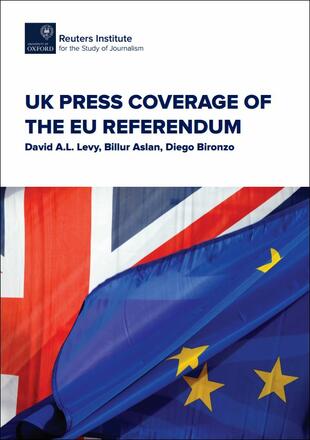 The report is based on analysis of two days of press coverage (Tuesdays and Saturdays) each week for London editions of nine national newspapers over 4 months of the campaign (February-June 2016).

The UK’s membership of the European Union is a highly complex issue. In covering the issue in the lead-up to the referendum, the press response was to focus heavily on the politicians and campaign representatives. This may have been a way of simplifying the issues but it also ended skewing the coverage to the political game and away from serious debate of the topic. Moreover, it is argued, “it made the press heavily dependent on the material fed to them by each campaign and by the politicians.”

Regarding the differences in tone between the Leave and Remain arguments in the press, the report highlights that the pro-Remain articles were marked by a focus on the single issue of the economy, adopting a generally very negative tone. In contrast to this, pro-Leave articles adopted a more positive tone, balancing criticism of the status quo with hopeful messages for a pro-Brexit future. Pro-Leave articles did play to fears, notably around migration and sovereignty, but their future-oriented messages were more optimistic.

The research addresses the national press, including both editorial and news items, rather than television channels and social media platforms. The focus on the printed press is justified in consideration of the long recognised agenda-setting role of the press for other media, and in addition because newspapers still account for the largest share of investment in original journalism.

Moreover, the analysis of press can be regarded as more telling in such a divisive topic as the referendum, as newspapers have a long tradition of political partisanship and are not subject to the impartiality requirements imposed on broadcasters. Unlike the press, UK broadcasters are bound by a requirement to offer due impartiality and broadcasters always face difficult judgements on how to do that, particularly during election periods.

What about social media?

As noted in the report, on social media ‘the Leave camp outnumbered the Remain camp 7 to 1’. As noted by Polonski, ‘Using the Internet, the Leave camp was able to create the perception of wide-ranging public support for their cause that acted like a self-fulfilling prophecy, attracting many more voters to back Brexit’ (Polonski, 2016). Thus, it could be argued that social media to some extent amplified the preferences displayed in press coverage rather than providing an alternative view.