Ukraine: impunity persists for the murder of Pavel Sheremet

A year after journalist Pavel Sheremet was killed by a car bomb in Kiev, Ukraine has so far failed to make progress on the case. A report highlights issues with Kiev’s credibility and suggests the need for an independent probe 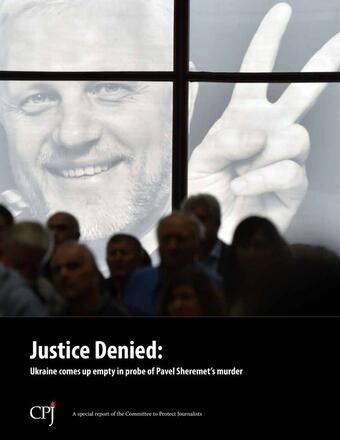 Sheremet’s murder took place against a backdrop of attacks and hostility by nationalistic groups against journalists who covered the government critically or questioned its handling of the conflict with Russia-backed separatists. In some instances, government and security officials—including the Interior Minister overseeing the department investigating Sheremet’s murder—not only stood by, but "cheered the attackers on", as reported by the Committee to Protect Journalists.

Against that backdrop, the murder of Pavel Sheremet "sent reverberations through Ukraine’s press corps. Independent journalists there say they continue to dig into sensitive topics—corruption, abuse of office, the war in the east—but at an increased sense of peril."

The report draws attention to Ukraine's negligence in investigating the case and makes a number of recommendations to Kiev's government, including:

- consider inviting an independent international inquiry in Pavel Sheremet’s killing to ensure that every motive is thoroughly examined and that justice is achieved;

- condemn and order investigations into all threats and acts of violence against journalists in Ukraine, and condemn the practice of dividing journalists into patriotic and unpatriotic;