New insights into the analysis of political behaviour arrive from the behavioural sciences, social sciences, and humanities: how and why emotions, values, identity, and reason affect the way people think, talk, and take decisions, including on political issues. In 100 pages, an overview with suggestions for a future research agenda 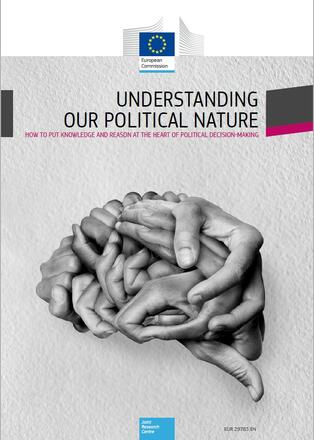 The collective approach was fundamental in writing this work: an international Call for Expertise was launched in March 2018 in order to find experts from different fields. A total of 60 people were involved. They then worked in 8 groups, each group answered the same questions in order to find the drivers of political behaviour and the most effective strategies for the optimal uptake of evidence into the political decision-making process.

The findings are grouped under 7 chapters, containing both the analysis and potential implications for policy-making:

The findings in this section can be summed up in one sentence: “We need to think more about how we think”. In fact, today's information environment, media, Internet, and social media significantly challenge citizens' political thinking. It's a matter of perception (according to so-called motivated reasoning, people have the tendency to arrive at conclusions that match their pre-existing beliefs, and the theory of emotional innumeracy confirms that, when concerned about an issue, people “tend to think it is more widespread than it is, making them worry about it even more”) and of being exposed to misinformation (where intentionality makes the difference between misinformation and disinformation).

Suggestions for policymaking and media in general include paying “closer attention to how people interpret information”, not disregarding people's fears (facts by themselves cannot counter misperceptions), and finding ways to tackle disinformation online.

This chapter examines the social dimension of reasoning, analysing how information and decisions work in a large group system, which is “more than the sum of its parts”.

The challenge for policy-making (and for journalism) is to transform groups into “intelligent and effective teams”, and the tools according to these suggestions include “reaching informed consensus”.

“Decisions are made of both emotion and reason”: this statement, based on science, can help policy-makers (and journalists) in shaping their activity. Both positive and negative emotions have to be considered important and the challenge is to find tools to measure emotions such as fear, anger, hopes, loneliness, pain.

Groups and sub-groups share different values and identities, and this makes it impossible to resolve the scientific debate between two different models of partisanship: “the instrumental model, which is based on ideological and policy considerations, and the expressive model derived from social identity theory”.

The suggestions for policymakers stress the importance of considering “values at the beginning of the policymaking cycle”.

“Facts don't speak for themselves”, this is the starting point of the analysis in this section. After an overview of speech figures, rhetoric, and communication techniques, authors suggest to pay “more attention to framing, narratives and metaphors in an ethical way”.

Trust in science has decreased because reality challenges the ideal of science being disinterested, impartial, objective, rational, morally neutral, and asocial. More efforts are required: experts and public institutions should set up new forms of dialogue.

According to the analysis, polarisation and partisanship undermine the government's capacity to use evidence effectively. For example, scientists at the US Environment Protection Agency have been barred from participating in advisory panels. A brand new approach is needed in order to improve for example the ability to communicate and apply evidence in solving complex policy problems.

The essay suggests a Future research agenda, with the aim of developing “an analytical framework of values” and understanding “how they influence political decision-making”.