This briefing by the European Parliamentary Research Service (EPRS) conveys fundamental information about the “Rule of Law Framework”, the EU assessment mechanism applied for the first time in Poland with regard to the management of state TV and radio broadcasters 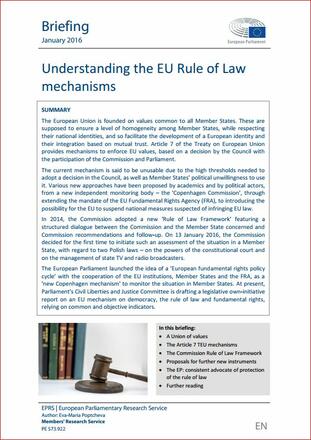 Article 7 of the Treaty on European Union (TEU) establishes a procedure to sanction a Member State which does not uphold the EU values, including the respect and protection of media freedom, through the suspension of membership rights. Yet, this mechanism requires a very high threshold and it has never been activated so far.

The Rule of Law framework offers a more flexible option and goes in the direction of the establishment of a 'new Copenhagen mechanism' to monitor the situation in Member States. The Rule of Law Framework is a 'pre-Article 7 tool', envisaged to address and resolve situations of systemic threat to the rule of law, thus acting prior to, and complementing the Article 7 mechanisms. The 'Rule of Law Framework' consists of a structured dialogue between the Commission and the Member State concerned and Commission recommendations and follow-up.

On 13 January 2016, the Commission decided for the first time to initiate such an assessment of the situation in a Member State, with regard to two Polish laws – on the powers of the constitutional court and on the management of state TV and radio broadcasters. As the procedure is just at the beginning, this briefing by the European Parliamentary Research Service (EPRS) conveys fundamental information about the functioning of the Rule of Law Framework.